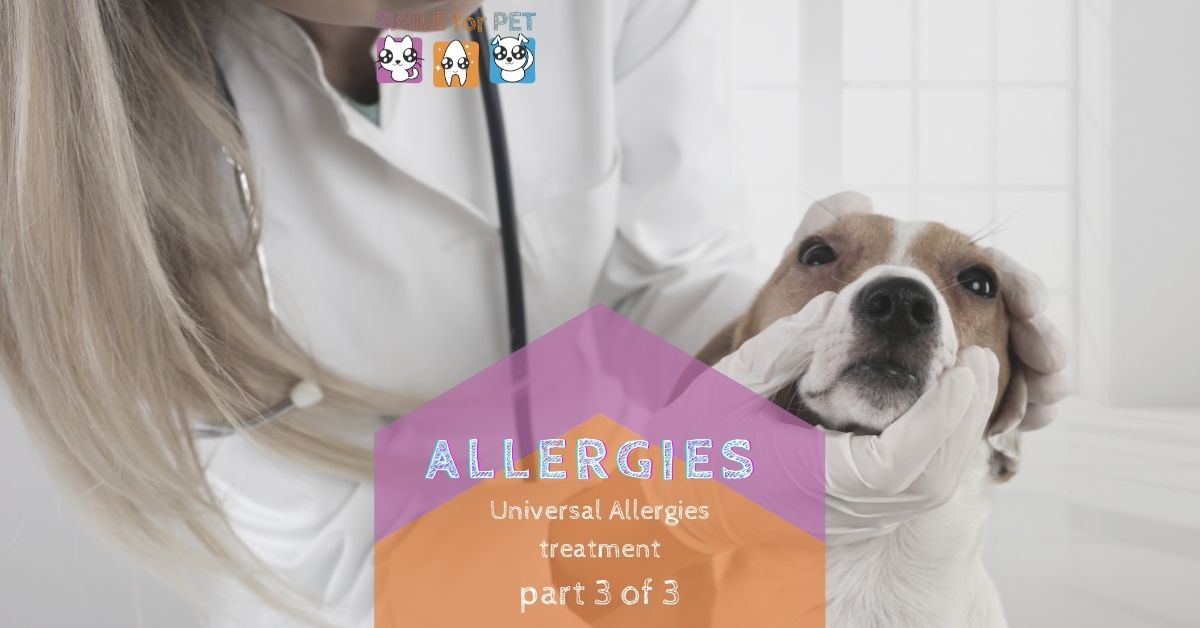 Since dogs’ hair is often an accumulator of allergens, bathing at least once every 1-2 weeks, preferably using hypoallergenic shampoos made with oatmeal components.

Systemic treatment should prescribe histamine receptor blockers and mast cell stabilizers. It is advisable to alternate 2-3 drugs prescribed for 7-14 days.

In our opinion, Smile4pet veterinarian antihistamines should not be used as an allergies treatment; to establish the allergic nature of dermatitis on an “ex juvantibus” basis. Mast cells and the substances they produce are involved in the pathogenesis of any dermatitis. The positive effect of which might not be observed only in allergies.

Recommend oral administration of prednisone or prednisolone. Dose: I mg/kg per day; in the morning, until the itching disappears (3-10 days); then prescribe the medicien one additional day later

According to The Use of Low-dose Oral Methotrexate in the Treatment of Polymyositis and Dermatomyositis by Newman ED, Scott DW

It should be kept in mind that one glucocorticoid may be effective in the same pathology, while the effect is insignificant. In such cases, it is advisable to change the drug.

In cats, glucocorticoids, unlike in humans and dogs, due to not yet fully understood phenomena, cause minimal side effects. It is advisable to use long-acting drugs such as Depo-Medrol.

Usage: repositol; methylprednisolone acetate; Dose: 20 mg per cat (5mg/kg) subcutaneously or intramuscularly, but no more frequently than once every eight weeks, or better, every 12 weeks.

If there is no effect, vetalog (triamcinolone acetonide), 5 mg per head, parenterally, once in an 8- to 12-week period, may be used as an alternative. If owners find such therapy uncomfortable, prednisone or prednisolone at a dose of 2.2 mg/kg daily for 5-10 days until remission is achieved, and then switch to the drug every other day.

In combination with oral administration of preparations containing fatty acids, the most common of which is fish oil, are considered to have a good effect.

In conclusion, we would like to note a good effect in treating allergic dermatitis universally after castration of animals and even the complete disappearance of dermatological symptoms. However, this issue needs a more detailed systematic study.

In conclusion, we would like to note a good result in treating allergic dermatitis after castration of pets and even complete disappearance of dermatological symptoms.

However, this issue needs a more detailed systematic study. As a dog owner, you want to make sure your four-legged friend is healthy and happy. But unexpected medical issues can crop up at any time, and vet bills can pile up quickly. That’s why pet insurance is such an important consideration if you want to be able to afford quality care. Here are 10 All about taking care of your dog: 10 basic tips

Your dog is a part of the family, and you should take care of him like one! Brush his teeth, give him regular vet check-ups, and much more with these 10 easy tips. Tip 1: Vet check-ups You know that your dog needs a yearly checkup at the vet, right? Just like you should get Veterinarian check-ups – why, how, and how often

Dogs need regular veterinarian check-ups just like humans do. A vet can catch minor problems with your dog before they turn into big ones. They can also give your dog essential shots and vaccinations to keep them healthy. Not all vets offer the same services, so it’s necessary to do your research before choosing one.